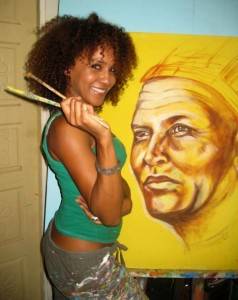 Vanessa Paulina grew up in the Caribbean, on the ABC islands: Aruba, Bonaire and Curacao. Places very dear to her, her African/ Indian heritage is therefore quite visible in her work. She departs to The Netherlands where she studies Fashion design and Illustration. Considering the world as her playground her life becomes a journey to discover the globe basking in live experiences she later expresses in her paintings. As a painter Vanessa is best known for her Childhood and Schizophrenia series: In her ‘Childhood Series’ she relives her past memories by painting moments captured in time. The series will probably never have an ending, as Vanessa loves having her inner child around. Her Schizophrenia series are filled with nostalgia, here she deepens the layers and let her paintings speak about vulnerability, healing and acceptance. Vanessa just started another series called the Goddesses, inspired by the power of the feminine energy she is helping to bring back to our planet. Having exhibited around the world, her work always leaves traces of the Diaspora she comes from. She also works as a muralist and has given various international art classes in Drawing, Painting and Fashion.

She studied Fashion and illustration at the Academie van Beeldende Kunst (WDKA) in Rotterdam. Prior to this she studied Fashion at the Design Academy in Eindhoven and before that Creative Fashion at the ‘Windroos’ Rotterdam. To sustain her artistic endeavor she took classes in Caribbean History at the University of Leiden and did courses in: ‘Business management’ at Atlas Rotterdam, and at Kunstenaars en Co in Amsterdam: ‘Time management’ and ‘In the picture’.

For more information on the artist visit : www.vanessapaulina.com

2015 Solo and permanent Exhibition at the museum of Tambu;’Shon Cola’ Curacao.

2013 Solo Exhibition at the Historic Museum of Aruba theme: ‘Freedom to Choose’, 150 years abolition of Slavery. Exhibiting Virginia and the illustrations of the books:’Ik Neem Je Mee’ and ‘Aboikoni’ written by Hilli Arduin.

2013 Solo Exhibition at OBA in Amsterdam The Netherlands.Exhibiting the illustrations of the books:‘Ik Neem Je Mee’ and ‘Aboikoni’ written by Hilli Arduin.

2011 Solo Exhibition held at IPA, Oranjestad Aruba, ” The Language of the Eye”

2010 Solo Exhibition at Westin Hotel Gallery Aruba, Titled; ‘ The Language of the Eye’.

2010 Group Exhibition with the title of’ ‘ De  Tekenkamer’ held at De Rekenkamer Wilhelminastraat in Oranjestad Aruba.

2010 Group Exhibition held in The Westin Hotel Gallery during the Art Auction for the victims of  the earthquake in Haiti, Oranjestad Aruba.

2010  Participation in Street/ Store Exhibition in Rotterdam Noord, The Netherlands.

2008/ 2009 December/ January, Solo Exhibition at ‘kas di Kultura Curacao’ with the ‘Interkambio Kultural’, (Cultural International Exchange) Vanessa Paulina is the first visual artist invited for this Cultural activity and also the first artist having an Exhibition in the brandnew Gallery of Kas di Kultura Curacao. the title of the Exhibition; ‘Tambu e Ritmo di Alma’ meaning; Tambu the rhythm of the soul ( tambu= drum)

2008 November Solo Exhibition ‘This is our Culture’, at ‘De Kom’ Hoogvliet, introducing the Dutch Antillean and Arubian Culture to the layman.

2008 October Solo Exhibition, open Studio at my place for a delegation of government Ministers from the Dutch Antilles organized by Rotterdam City Safari

2008 October Solo Exhibit at the ROC Hilversum during the miniconference held for a meeting between the Dutch Antilles, Aruba and the Netherlands amongst the delegation there was also the presence of his Excellency’s  Frido Croes and Paul Comenencia

2008 July Solo Exhibit at theater Zuidplein Rotterdam the Netherlands, topic; ‘Upbringing something we do together’, a debate hosted by Mavis Albertina especially for Antillian mothers.

2008 Exhibit of “Virginia”at the Historic Museum of Aruba in Oranjestad Aruba. title of the exhibit; ‘Exposicion Herencia di

2007 Solo exhibit at the Hoge school van Rotterdam during a presentation of the book “Students of Excellence”, authors Shiara Vismale and Theo van Straaten, about students who came from the Netherlands Antilles and Aruba.

2007 Solo exhibit and reading of I&I and work during the “Each one teach one” at the Ninsee Institute in Amsterdam, National Institute of the slaveryhistory and it’s heritage.

2006 Solo exhibit at the World Trade Center Rotterdam, during the Zakenfestival, Rotterdam, Holland.