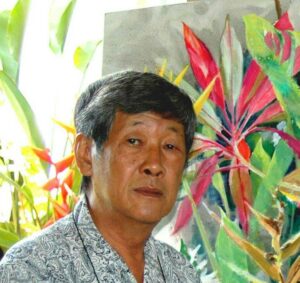 Born in a chaotic society, immersed in today’s ever transitional change, I try through art to make sense of human bondage, how to cope with colonial heritage of disgraceful exploitation of human beings. During the process I experienced the wonders of a magnificent Amazon rainforest.

Suriname was a colony exploited for the benefit of European Colonials. Indigenous people were conscripted as slaves. The dwindling supply of natives was replaced by people from Africa. When transport of Africans was forbidden the shortage was replenished with shanghaied indentured laborers from China, then India and last from Indonesia. To all the descendants the Colonial heritage is a disturbing saga.

“…to be the object of contempt or patronizing tolerance on the part of the proud colonizer is one of the most traumatic experience that a individual or society can suffer…”, Isaiah Berlin.

The subjects I have captured in art exemplify efforts of people surviving and their exceptional will to change the humiliating heritage of human bondage.

I sense in many a tolerance of their fellow human beings and a willingness to reach out. This tolerance is a young fragile plant now sprouting in the rainforest plantation, displaying constructive civil interactions.

1958-1966   until my return to Suriname in 1966, participated with various exhibitions in Amsterdam, Delft, Leiden.

1966           I convinced myself that I should leave behind the “modern” perception of life and go back to the magnificent rainforests in South America, to the basic life of exposé. The instinct to survive and adaptation of man to the rainforest and plantations, has been my best inspiration source. Went along with expedition to paint in the rainforest and villages of the indigenous people and Aucan, Saramacca tribes.

1966            Together with other artists, we founded the first Art Academy in Suriname to facilitate the talented.

1967        Group exhibition of Surinamese artist in Amsterdam and other cities in Holland.

1975           I was awarded an Honorable Mention in Denver, Colorado for my mahogany sculpture named: Human Sacrifice”. This sculpture was also part of a sculpture exhibition in New York City.

1981           At request of the Department of Cultural Affairs, I established an “Art Expression Department” for the very young. These children, saddled with the burden of a colonial heritage, could at school freely express themselves. Selected drawings were often sent to international children exhibitions in Japan, Taiwan, India, China, USA and other countries. Many of the children won international awards and were an inspiration to all. This school was later renamed by me after a Dutch lady in honor of her pioneering work in Suriname – “ Nola Hatterman Instituut”.

1999           I compiled a video autobiography by using my file photos, paintings, sculptures and video materials which I have accumulated over many years. This unique biography reveals the wonders of the rainforest, the ceremonies of the indigenous people (rarely performed) and my resulting paintings and sculptures of these subjects. This documentary captures the imaginations of the audience and surprisingly became acollectors item. A second video, documenting the process of bronze casting, was released one year later.By invitation from Changchun City, China, I modeled the sculpture “The innocense”, in 2003. This 2 meter bronze sculpture is no won permanente display in Changchun Sculpture National Park together with 300 international sculptures.

Provide information and serve as a resource person on areas of art and history on the Indigenous people of Suriname and Chinese contractors who first came to Suriname and the Caribbean.

Compiling photo materials from my art works of recent years and writing short stories on how these works came to be. Photos as well as short stories will be published in my art book.

1967 – Arti & Amicitia, Amsterdam-Holland (as well in other cities for the next two years)

1997 – Trade Fair And Culture Of The Caribbean Basin – HYATT-Miami