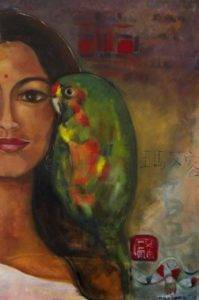 The artist Patricia Ma Ajong cannot be confined to one category. Born in Suriname, ancestors from all corners of the world, lived in Paris for a long time, now living in the Netherlands, and currently back in Suriname for a few months. She is determined to do a lot of painting in the coming period.

‘Once I get into the flow of it, one idea after the other comes into my head.’ When Patricia begins working again, she does that by starting with a painting that she is not pleased with. ‘Then I talk to the canvas and say: “We are going to do something with you!”. I am rigorous, I occasionally torpedo the work. This almost always results in something good, but often the other one, the existing work, was also good.’ The artist laughs about it herself.  ‘With art works it is just as it is in life. Nothing stays the same, there is constant change. On the canvas, you immortalize the lost moments; you briefly hold on to them. That gives me some peace of mind.’

A selection from the exhibitions of Patricia Ma Ajong that have been on display in Suriname.  In 2009 she had her first solo-exhibition in Suriname, in Galerie Steinhoff: Flying Eye. In 2011 she exhibited in Royal House of Art met Overeind staan (standing upright). This exhibition was subsequently on display at ‘Het Surinaamsch Rumhuis’ (also on Facebook). Soso Oso was on display in Gallery Sukru Oso, in 2012. In 2013 she also participated in the National Art Fair. Early 2014 she participated in the Fashion House 3d edition fashion show, in an original way: the models walked the catwalk not only in clothes, but also with Ma Ajong’s work.

The theme that she was so successful with in Suriname, is that of the wooden houses that are so typical of the old inner city of Paramaribo. Initially she had hoped to be able to directly contribute to the restoration of the dilapidated houses through the sale of her works, but talks with the foundation ‘Paramaribo Stadsherstel’ assured her that this would be like a drop in the ocean. That is why she has now chosen to, where and when she can, by painting these beautiful, but often run-down homes, bring across a message of awareness to the Surinamese people about preserving this part of our heritage.

It means a great deal to Patricia that ‘Centrum Beeldende Kunst Zuidoost‘ (also onFacebook), in Amsterdam Zuidoost, the Netherlands) recently purchased three of her works, amongst which also a painting of a typical wooden house. ‘What could be better than having work of myself included and on display in the collection of this Surinamese stronghold in the Netherlands?’ It seems to be recognition of at least one part of her artistry, because the fact that she has Surinamese roots, in any case partially determines her identity.  But, as mentioned earlier, she cannot be placed into just one category. ‘I have also heard people say that they think that my work exudes a French atmosphere.’ Passion and love, women and birds: all universal themes that are also seen in the work of this artist. ‘What I paint is about life itself, what you experience, what I discover when I delve into the past… I love those things that I cannot put my hands on. That is what I try to express in my paintings.’

Visual art has always played an important role in the life of Patricia Ma Ajong (Paramaribo, 1960). It is only in recent years however, that she has been able to make her passion for art the center of her being. In the late eighties she studied graphic design in Paris, France. She lived in France for ten years, and after a period in Suriname and Indonesia, she currently lives in the Netherlands. In Jakarta, Indonesia she took courses in oil painting techniques. Several years ago she concluded a study at the ‘Vrije Academie’ in the Hague, the Netherlands. At this moment she is once again spending some time in her country of birth.

She sees her work as the logical outcome of the sum of all parts: her multi-cultural background and the many countries where she has lived and which she has visited. Her motto: ‘Art is the representation of the soul and the source.’