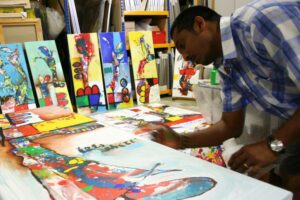 In the past, before my studies in Jamaica I painted everyday scenes in a mostly realistic style. In Jamaica I was encouraged to find a theme that really speaks to my soul, so I turned to the subject that has influenced my entire life: ‘Love & Death’; The death of my father before I was born and the questions, the sadness and emptiness I have always felt because of this. I channeled those emotions through my art. My work became more abstract, emotional and impulsive. At first my paintings were somber and dark, but later on this changed and I started making more colorful paintings. The negative emotions of my fatherless youth were gradually making place for happier ones associated with my own family life and fatherhood. People change, emotions and lives are changed by personal experiences. Having my own family has inspired that change in me and in my work. My work is mostly abstract, with some degree of figurativeness. Recurring objects in my work are letters and numbers representative of communication, simplified silhouettes of figures which are usually the people who are part of the story, and a special family symbol that I always incorporate.

Missing my own father has always been, and will always be important, but at that time I primarily expressed the love and connection I share with my family. The main theme of my work was then ‘Lob Makandra’ – ‘Love each other’. Not only my paintings, but also my three dimensional art installations have recently dealt with that theme. Growing up without a father, my installations often deal with children, with special attention to children in foster homes and orphanages, who grow up without the love of a family. I hope to garner more public attention and support for these less fortunate children.
During my residency at the Vermont Studio Center in the USA in 2011, I entered yet another phase. I started contemplating again the subject of my fathers death and my work started to show darker colors once more. It took me a few years to come to terms with this change that was once more taking place. It is only recently that I have accepted that my work will always reflect the fact that the subjects of death and love, will both forever be part of my life. I have started to gradually present these works that I have been working on for some time. I am now more willing to embrace this new phase in my art, to allow the darkness as well as the color, the past as well as the present, sadness as well as happiness, to shine through in my work.

2001 An Opus of Love, Waaggebouw, Suriname

2015 Art without Borders; from Suriname to Curaçao, Landhuis Bloemhof, Curaçao

2011 Conversations on Paramaribo perspectives, catalogue about the exhibition in Rotterdam

2011 About Change-In Latin America and the Caribbean, digital catalogue about the About Change Art Program of the World Bank in Washington DC, 2010/2011

2010 Wrestling with the image-Caribbean interventions, digital catalogue of the exhibition at the OAS (as part of the About Change program of the Worldbank)